The Adventure to Goat Isl. AL029L

In May of 2008, I was looking through the contest season calendars and noticed the US Islands contest in mid-October. Reading further, I realized that the only real way to compete with any dignity would be from a qualified island location. I started looking through the list of islands in North Alabama and Southern Middle Tennessee to find a suitable island to visit for the contest, but found only one island close by. That island is accessible via road and doesn’t appear to be much of an adventure to access. I also noticed that a very popular and well-known island, at least to the locals, is near a friend’s house on Smith Lake had not been qualified. So the quest began to find some friends to go play radio with me on the island. 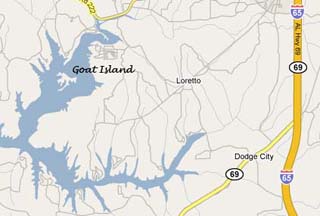 For months, a few of my amateur radio friends and I talked about qualifying Goat Island. None of us chase islands, but we all think it would be fun to qualify and activate some islands for others who do. We were waiting for someone in the group to set a date, but with the contest looming ever closer, we were running out of weekends to go. Several of the folks interested in participating work on the weekends or physically can not comfortably make the trip due to health reasons.

Early Friday morning, Oct. 3rd, 2008, I was not working, nor was Craig (K9TEN). Craig had also shown an interest in qualifying an island, any island. We decided it was now or never. I sent a few quick emails to our friends to see if they wanted to play hooky and go with us, but failed to raise any other takers. Craig and I both had things to do before we could leave, along with assembling the necessary egear. Not having done this before resulted in us bringing too much. Of course, we thought that we NEEDED it all. 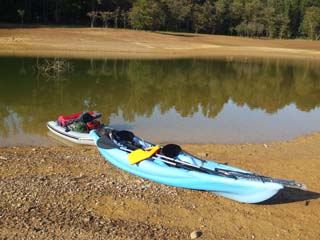 Craig met me at my house and we loaded the truck, and headed out at about 13:30 local time. It is a one hour drive from my house to Smith Lake which is located just west of Cullman in North-Central Alabama. Our aquatic transportation was to consist of a two-person “sit-on-top” kayak and either a tube (which is usually used behind a ski boat), or an inflatable 2-person raft which we hoped to find at the house located at the launch point. The plan was to load up the gear in the raft (or tube) and tow it behind the kayak as we paddled the short distance to the island.

When we arrived at the lake we found the raft was available. As the raft inflated it looked smaller and smaller and we soon questioned if a small generator, 2 backpacks, a small pelican case, a battery box, 2 chairs, an umbrella, 3 push-up pole antennas, a cooler, a roll of ladder line, a 150 foot extension cord, and 3 bags of miscellaneous gear was going to fit into a raft and narrow kayak. After some careful reconfiguring of items in the boats/raft, we got it all on board and got underway. 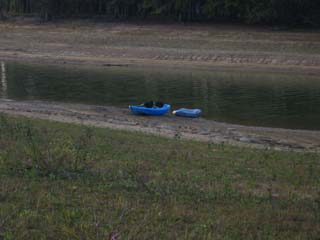 Smith Lake is a creek and spring fed lake that was impounded in 1961 to provide power from its dam and also provide a constant water flow for cooling to a power station down stream. It has a significant seasonal water level fluctuation which, at the time of our trip, was about 15 feet below full pool. I had already scouted out several spots on the island to land and operate from several weeks prior. About halfway to the island, towing the raft behind us, we decided one of the closer landing zones was preferable. It took about 20 minutes to paddle out there pulling the raft. Lucky for us, the wind was calm and, since it was mid-day Friday, no boats were on the water at the time to create waves. 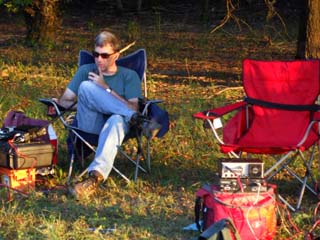 We had decided on a two radio setup. Craig was going to use a 23-foot vertical antenna, run some ground radials, feed it with ladder line through a balun to a Yaesu 857D powered through a power supply by the generator to work primarily SSB on 40m. I was going to use a 20m bazooka hung between tree limbs fed with coax to an Icom IC-7000 powered by four 7Ah UPS batteries in parallel (despite the fact that the generator could easily power us both). I planned to work 20m SSB and hit the PSK31 and RTTY modes using an Asus Eee-PC running Linux once Craig was setup on 40m.

Getting the vertical up was our first priority once we hit the dirt on the island. So we unloaded the gear from the boats and quickly erected the 23-foot vertical using the push-up pole and a piece of wire. We ran about a dozen ground radials and connected the ladder line. We set the generator about 150 feet down the tree line and ran the extension cord to Craig’s station. While Craig completed the connections back to his radio from the antenna, I strung the bazooka up between two trees about 20 feet in the air and got my connections completed to my radio. 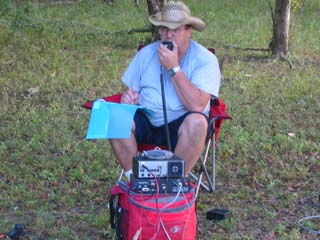 We made first contact at 22:38Z to WA6NHO on 20m. We were pulling in a new contact about every 10 minutes at first and had to change frequencies a couple of times as the band opened up to gray line propagation to avoid some other amateurs who were rag chewing. As the sun set and darkness descended, we realized how hungry we were and I took a break to pull out the sandwiches we had brought along for a quick snack. In the meantime, Craig was pulling in the contacts on 40m where he encountered a couple of small pileups that were quite fun to work.

I switched to the digital modes on 20m where I saw hardly any activity and had no luck due to poor band conditions calling CQ at various power levels. After half an hour and no takers, I noticed Craig had his hands full with a pileup and was having trouble logging and talking, so I shut down my station and worked the logbook for Craig. At 00:36Z, KB3I became our 25th contact. Because we had already worked 2 DXCC entities, the island was now qualified and K4QXX got the first issuance of AL029L at 00:38Z. The last station in the pileup was worked at 00:50Z and no one answered several CQ calls following. We shut down Craig’s station having logged a total of 35 contacts on both 20m and 40m. 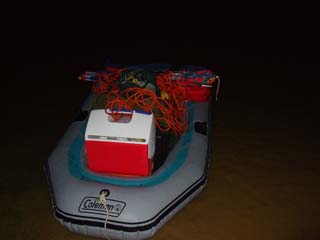 Packing up in the dark was an interesting task since the sun had set over an hour before and the moon had not risen above the horizon yet. We had two flash lights that we used to take down the antennas and roll up the various cables. We had been smart enough to make sure all our gear was grouped in a small area near our chairs before it was completely dark which helped us to make sure we left nothing behind. It also made it easier to put an umbrella over everything to keep the heavy dew that was settling from getting on everything. We moved everything down to the water’s edge so we could attempt to reload the raft the same way we had when we crossed the first time.

Craig setup one flashlight as an all-around light on the front of the kayak and I had another light in hand in case we saw another boat on the water. We exiting the slew of the island and rowed several meters along its shore until we got to the shortest crossing spot and headed towards shore and our truck. 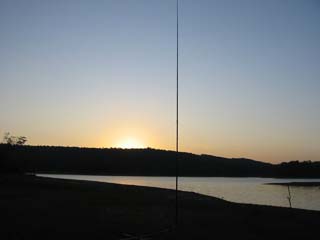 We learned a lot from this first trip that I think others will find helpful for their future endeavors, especially if it is your first time.

Thanks to all those who contacted us during our adventure, we sure appreciate your making it a success.