The US Islands program (USI) is found at https://usislands.org/ and it is not associated with the IOTA program but rather for islands found within lakes, rivers and ocean shore of the United States. I also qualified one other USI, TX035L, Rattlesnake, many years ago and have activated TX003S, Goose island in the Gulf of Texas.

Well, not to get bogged down here but put in simple terms it has to be an island with a known name and certain sizes. For the purist note the USI rules state, “Bridges and narrow causeways linking the island to the main land or other islands are acceptable.” This allowed me to use the Motor home for RV camping on Quarry Island – I am no longer agile enough to do the boat thing and carry equipment to a remote island!! I did actually use the generator for power for a few of the contacts during a power outage but that is another story. Look up the referenced web page if interested and you maybe can activate a new island.

Well, as I said there is a short causeway and Quarry Island is part of Lake Wister State Park. We have actually avoided this park as it is in need of a lot of upgrading, etc. But with the lure of activating an island that has not yet been activated I felt it would be acceptable for a few days and the XYL threw in her blessing to sweeten the deal – she likes to sit and read when we camp and draw and work on some wood work projects and she is super supportive of my sometimes crazy hobby. Actually she enjoyed our time on the Island very much and did not want to leave.
I proposed the island to the USI QM (Qualification Manager, Ted, W8TTS) and he looked it over on Google maps and agreed it fit the criteria, assigned an initial number of OK028 and added it to the USI directory. The “L” designation at the end is for “Lake” and does not get affixed until the island has been “qualified”. Anyone could have activated the island but since I was planning to head there the next day I made it first!
Quarry Island is near the Eastern Oklahoma town of Wister and was an easy 100 mile drive from our previous location in Arkansas – and directly on our way home to North Texas. I was unable to find information or history of the Island but the name and the presence of some large stones (pun not intended) laying around one can only assume some quarry work happened in the past but I am not certain. A Google view shows the small causeway that appears to have been added when the original lake was formed by the dam. Google Measure shows the Island to be a little over half a mile long and about 700 feet at the widest point. The island is part of the Oklahoma State Park system and has seven RV sites and a dozen or more tent sites. 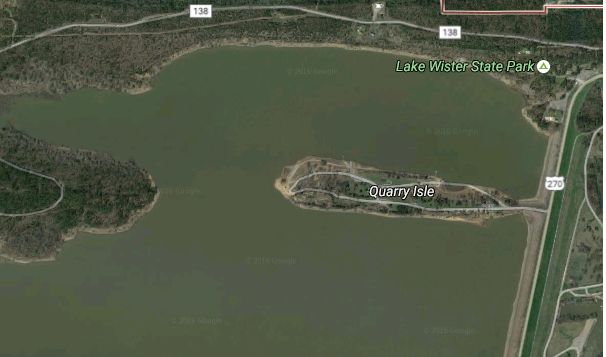 I use a Kenwood TS590S and run 100 watts as I don’t carry an amplifier. I carry a few different antennas but my favorite is the full size G5RV. As you can see in the picture I had plenty of room here to erect the full size antenna. The ‘ol trusty sling shot worked well and I got the antenna hoisted up to about 35 feet at the apex. This was a CW only operation so my Bencher paddle got the job done. I have no computer control of the rig when traveling or at home.

To “officially qualify” the island for the first time, the rules are simple: 25 contacts from the island and must include at least two DXCC. Well, thanks to CW friends that initial activation took 34 minutes!!!! And it was a hoot. As K3WW pointed out in an email I even had a little pileup going for awhile!
We camped on the island 3 days and this activation resulted in some nice walks, afternoon naps, a wonderful meal at the Southern Belle in Heavener, beautiful sunsets, sunrises and oh yes I was here for ham radio so it included some contacts: CW Only operation from 18-20 October 2016. Logged over 300 contacts with all continents, 16 DXCC and 35 U. S. States.
As Jim, N3JT says of me, what tree will I be hiding behind next?
73,
Gary, N5PHT