The idea to activate an island was borne in the regular club meetings (Amateur Radio Transmitting Society, ARTS), after discussing activating Shippingport (KY002R) near downtown Louisville, for about a year. 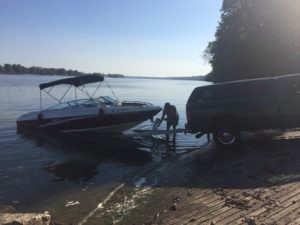 Bill KC4ZMZ offered his boat (a ~19′ Mariah) in order to access Twelve Mile/Emery, instead of Shippingport, at the encouragement of Michael KM4BKR. Twelve Mile/Emery ( KY027) belongs to Jefferson and Oldham counties, is completely undeveloped, and is only accessible by boat. There were 3 ‘takers’ for the qualification in August 2016 – Bill, Michael, Greg WX8V. Greg offered an antenna that had worked quite well at first trial during FD in June, which was the MyAntennas model EFHW-8010 end fed half wave. We also brought a FT991 and a FT897. Another club member loaned a Honda EU2000 generator. The Qualification run and W/VE Island QSO Party days were pretty much ditto, schedule wise. Dave W4DFR also attended on the QSO Party day. We met at Cox Park, Louisville, at 9 am, where Bill launched the boat after we loaded it. (Food, drinks, fans were included! Also, tools and accessories.) It is a ~5 mile ride upstream on the Ohio River to Emery, past the new ‘east end’ bridge under construction which will join I-265 to Indiana. 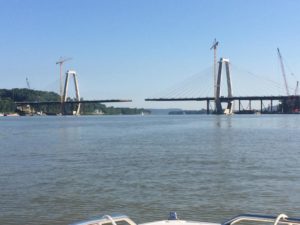 Once in a lifetime shot!

There is a steel staircase installed at the “beach” of this island. 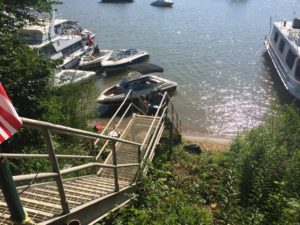 There are few other amenities!

There is a very spartan shelter which houses tables and chairs belonging to the Knights of Columbus for their annual Boat Club weekend, which was, of course, the same weekend as the W/VE Island QSO Party and Qualifying run. 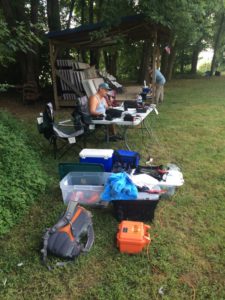 With all this activity upon our arrival, there were plenty of curious onlookers as we carried the gear up, and set up in the shade aside of their picnic, and started operating. 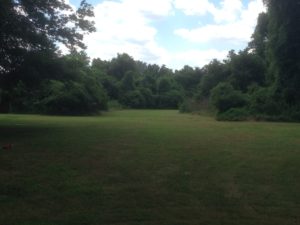 There is one clearing being maintained by a volunteer on the otherwise wooded island; thus we had to share the space. We did have it to ourselves on QSO Party weekend. It is a pot-shot upon arrival since it’s a mystery who might be there. No known schedule keepers. 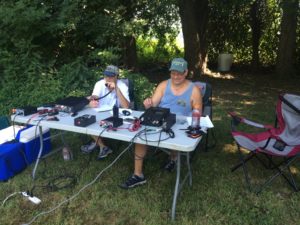 The antenna was hoisted using the slingshot-with-reel device. We got it up only about ~15 feet. It is ~132 feet long. A buddi-pole was also tried, but didn’t work nearly as well. The generator was quiet below the ambient noise level; wonderful. We operated from ~10:30a till ~6p each session, taking turns. The noise level was low, and the bands fair. 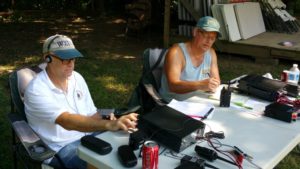 Nothing above 20 was open. We did quite well with this antenna! Highly recommended. No tuner needed-just as advertised. It seems to get out better than it hears. It was extra special when getting a QSO with another island. We had to explain a few times this is not IOTA. 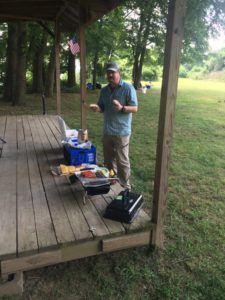 Michael broke out the grille to make the hot dogs. We ate well.

I think the club will want to do this in the future – all participants had a blast.