When the fish aren’t biting, hoist up the antenna and catch some DX, if you’re not too awestruck by the breathtaking scenery, that is!

The harbor was alive with the sounds and odor of the sea as I eagerly inspected the ships HF gear. I was impressed – an IC-737A transceiver with a SGC-232 tuner coupled to a 35 foot long mast-mounted wire vertical antenna! Our quest was fishing, beachcombing and keeping in contact with new and old friends, including our loved ones back home, via Amateur Radio. Most importantly, the HF rigs (including my back up station) were along in case an emergency arose. Unfortunately, Gary, WL7LV (Brenda’s OM), owner of Alaska Island Adventures was away on business and couldn’t join us. 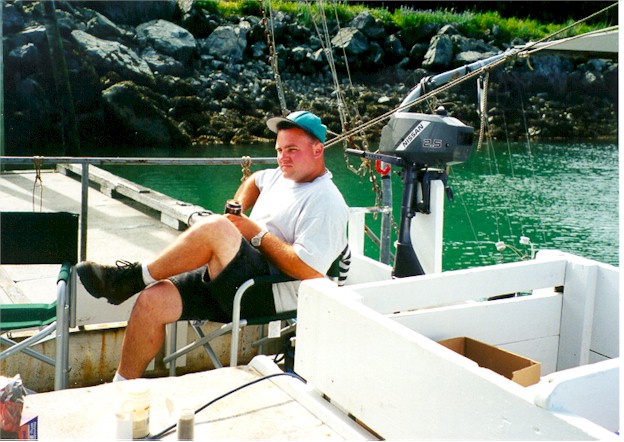 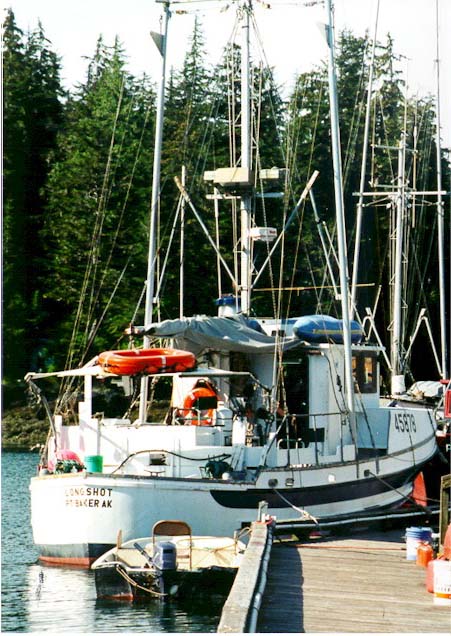 CQ CQ CQ de KL7JR/mm KL7 (56 26.22N 132 58.41W)
Twenty meters exploded with calls shortly after I unkeyed the mic from the wheel house of the “Longshot”! 4U1WB, KL1V, KL7KG, F5SL, AB7PX, WB0TVP, and several others easily made the log. We were asked again and again for our position and what the weather was up to. Most everyone chuckled when I mentioned I was not on an island (yet!). Gary’s station and antenna installation was sure working out great for me! Later we docked in St. John’s Harbor on Zarembo Island to make camp. After a hearty ribeye steak dinner cooked on the dock by captain Bob, we took the dinghy “Shortshot” out fishing and beachcombing.

Fishing was slow but the weather was absolutely incredible. We only caught a few small salmon and halibut. The next day John pulled in a small sand shark and conned Bob into barbecueing it for us. It wasn’t bad! Zarembo is a largely forested island with rocky beaches littered with driftwood, typical of the islands in Southeast Alaska. I gave out Zarembo Island (AK-101S) throughout the evening and early morning before we loaded the “Shortshot” for Northerly and Southerly islands, about a quarter mile away. USI club station call KL7USI was used exclusively from all the islands activated on this adventure.

I climbed a large pine tree (thanks for all the sap Mr. Tree!) on the southwest tip of Northerly Island and hung the G5RV. The island was easily qualified as was Southerly Island (AK-171S) a bit later. It was a very bright hot day and I was always scrambling to find some shade.

Along Alaska’s Inside Passage lies 17 million acres of lush forest and snow covered peaks called the Tongass National Forest. Our journey starts in the heart of the Tongass in the Alexander Archipelago, a group of about 11,000 islands (actually the tops of submerged mountains) off the panhandle coast of Alaska. Southeast Alaska stretches 560 miles from Dixon Entrance at the US-Canada border south of Ketchikan to Icy Bay northwest of Yakutat. From Wrangell on Wrangell Island, to Point Baker on Baker Island, we pass near hundreds of islands. The largest Islands being; Kuiu, Zarembo and Kupreanof. Kuiu Island (pronounced cue-you) is a virgin rainforest island, the ancestral home of the Kuye’di Thling-git’ Nation, located 50 miles southwest of Petersburg. Not much is known about Zarembo Island other than it’s inhabited by a small elk herd first introduced there in 1987. Kupreanof Island, 6.2 square miles of rock and trees, is about 120 miles south of Juneau. No public facilities exist on these islands. Wrangell began as a fur trading post in 1834 and since that time has thrived under three different flags- Russian, English and American. Point Baker is located about 250 yards off of the northwest corner of Prince of Wales Island. Prince of Wales Island is the third largest island in the United States. Point Baker’s population is around a dozen or so folks. The community offers limited facilities compared to Wrangell, which boasts a population of around 3100 with a complete range of visitor facilities.

Next islands activated were Sumner (AK-171S) and Kuiu (AK-048S). Conditions were very rough on Kuiu- I almost gave up. QRM/QSB was at its worst but thanks to the efforts by Terrie, AB7PX and Bob, WB0TVP, we made the minimum required contacts. Hours later we received a warm welcome at Ruffies Bed and Breakfast on Baker Island. I couldn’t help but wonder if Gary, WL7LV set me up because of the questions I was being asked, “so you’re a ham too”? and “Gary says you guys can talk all over the world, eh”? It sure felt good to be on land again. Point Baker’s other amenities include a bar and cafe (Alaska’s last floating saloon), local store and a post office. I was able to hang my G5RV antenna from the second story balcony to show a couple of the locals just how much fun Amateur Radio was. In the first hour of operating, we made over 75 contacts all over the US and Canada. Keith, KL7KG, worked us again on ground wave from Petersburg, across the bay. My guests sure were impressed, especially when we made more contacts from the “Longshot”. Thanks to Judy and Herb Hoyt for allowing me to activate their island. Baker Island was now AK-172S. We fished the next morning and picked up a few bottom fish before setting out for Wrangell.

I was working a pileup on 20m as John took over the captain duties while Brenda and Bob changed fuel tanks and prepared dinner. We dined on deck to a delicious barbecued chicken dinner- we sure were eating well up here! John and I made a few more radio contacts stateside before calling it a day. The fresh air out on the water is sure invigorating. An early morning fog and light rain set in, the first precipitation of our trip. Propagation was poor on 20m for most of the day as we fished along the coast of Kupreanof and Woewodski islands. Later we enjoyed beachcombing on Butterworth Island (AK-173S activated under fair conditions). Keith, KL7KG called me to say he’d already activated Woewodski Island (AK-167S) so we picked up a few others who needed it and then went maritime mobile. Thanks Keith, I was working with an outdated island list! Propagation was great the next morning. I enjoyed many 5×9 QSOs (VE3XN, VE7IU, VE7YL, VE3NSZ/m, W9HAO, and AA7AV to name a few). Garry, VE3XN, asked for our position. He collects countries, counties, islands, national parks, prefixes and maritime mobiles (did I miss anything Garry?). A few hours later and a hundred more Qs, I snagged TF8GX and later OE6MKG on the first calls.

TIME TO HEAD BACK

Although at times we worked extremely hard at fishing and DXing, we had a most enjoyable time. We crawled into and out of the dinghy so many times that we could probably do it in our sleep. When the bilge pumps kicked in, the QRM would reign over the radio, luckily only for a short time. Relays provided by AB7PX , WB0TVP and VE7IU were again beneficial to getting some islands activated under some very trying band conditions. Before we set anchor off of Vank Island, I worked many more W’s and VE’s from the wheel house then qualified Vank as AK-174S. Evening saw us jumping in to the “Shortshot” to get a close up of the many bald eagles feeding on shore. What a sight. We counted over two dozen of the mighty birds on the beach. Two Tree Island (AK-175S, yes there’s two big pines on it and named on the charts!) was easy to qualify- the hardest part was getting on the island at low tide (slippery rocks etc.). I was impressed with the DX we worked, especially since 20m was so up and down. We worked: 4F4, KL7, F5, ZK1, ZL1, VE1 through 7, VO1, G0, G3, TF8 and OE6. I almost fell out of the chair when the TF8 and OE6 acknowledged my first call in a big pileup. I guess one carries a bit of clout signing as maritime mobile as well as being on an island! We had a fantastic time out on the water. USI club station KL7USI got quite a work out from the islands. I thoroughly enjoyed spending time with my son doing what we both enjoy. Special thanks to Brenda for the delicious meals cooked; to captain Bob for his expert seamanship and never tiring of firing up the dinghy for our fishing and island jaunts and to Gary, WL7LV for the arrangements made and use of the ship’s radio. I highly recommend Alaska Island Adventures (I heard of them in QST!) for their unique services offered. 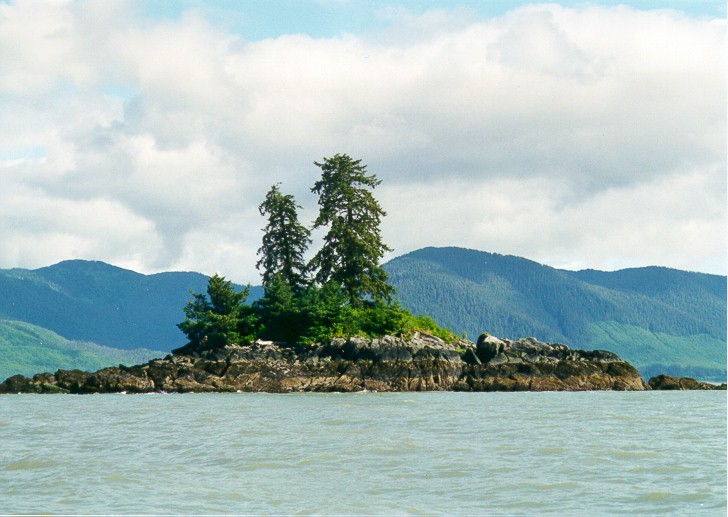 The next day John and I, and all our gear plus an inflatable canoe were on the jet boat “Stikine Warrior” speeding towards our rented cabin and eventually Shakes Glacier. A spectacular view of Popof Glacier from our cabin was “something to write home about”, the new attitude of Mother Nature wasn’t. She would have other plans for us later. The cabin had an oil stove which sure came in handy for cooking and heating, especially on the damp mornings and late evenings. After a light meal (we’re on canned food now!) and much needed sleep, we set out for Shakes Glacier in a light rain, which shortly after turned in to a heavy downpour forcing us to seek shelter on one of the many islands here. We were just a quarter mile from the confluence of Shakes Slough and the Stikine River. From under a tall pine tree we decided to put Shakes Slough Island #1 on-the-air. Again, what a rough time we had, this time add power supply problems to the QRM/QSB. Our rented marine battery lasted just one hour leaving us two contacts short for the required 25. Luckily we stopped three fishermen and got a quick charge from their boat battery. A pair of local KL7’s were worked to qualify the island as AK-176R. The icebergs from Shakes Glacier were brilliant blue and huge, floating all around us as we approached the face of the glacier. What an awesome sight! Too bad we didn’t have a decent battery, I sure wanted to operate from the glacier using K7ICE. Later we enjoyed a leisurely canoe ride back to the cabin only to be attacked by a horde of pesky little mosquitos. A big camp fire of smoking wet wood took care of them! A few hours later a float plane set down on the silty, glacial water for us. A very scenic 20 minute ride put us back in Wrangell to end our Alaska trip. John and I will long remember our time spent in Southeast Alaska and our new friends.