BOYD, oh BOYD, oh BOYD! How absolutely quiet! I mean, nothing stirring but some birds. I was looking at the boat ramp, and on over to Boyd island in the Holston river just east of Knoxville. Boyd island is a large plot of land, as far as east Tennessee goes, near the Forks of The Rivers, and the Holston, French Broad, and the Tennessee all meet there.

With only about one-hundred feet to traverse to the island, from the ramp, I decided to bring along the fast-becoming-famous “S.S.S. Minnowette”! I am sure some of you sea Captains are wondering what the heck “S.S.S.” is, so let me explain: “Surely Sinking Soon”; And the diminutive name, since it is an old, small camouflaged duck hunting boat, that fits in the back of my pickup truck. 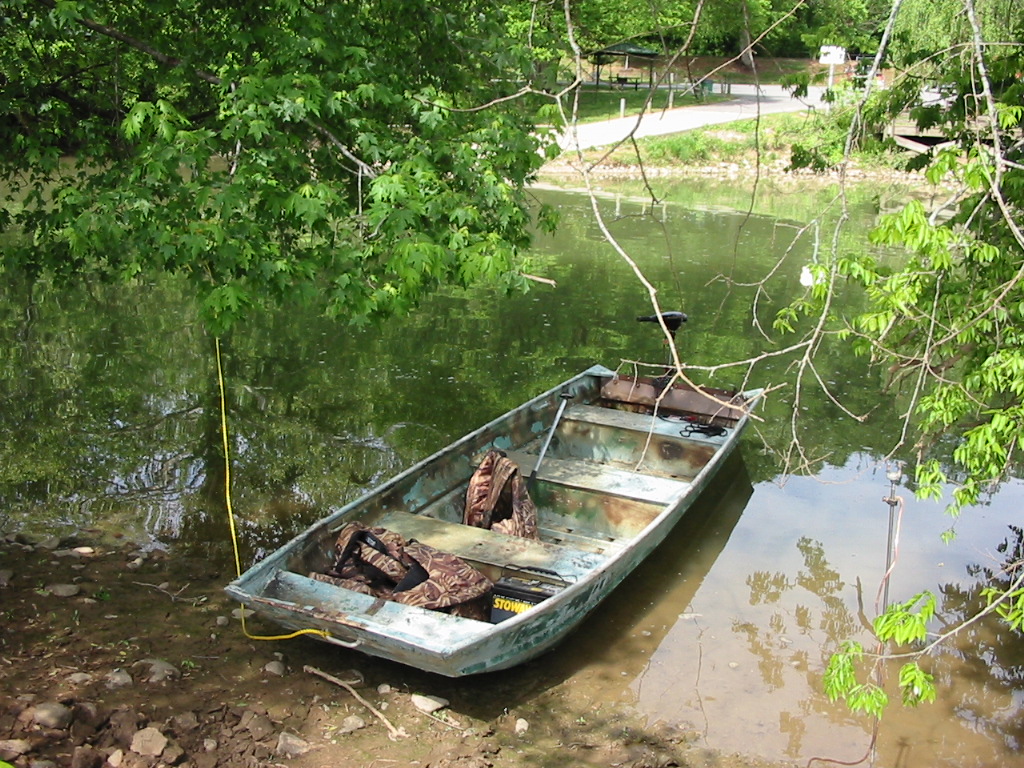 The first of the crew arrived – Drew (KG4HPZ), and Jessica (KG4SNV) – just as the parking lot was becoming packed with on-lookers for a canoe race that I did not know about, but what the heck, I can get along with anybody, especially if they bring lunch! So much for the previous QUIET …

We got the little craft in the river, and loaded the first batch of equipment, and Drew took me over to the island. As I waited for Gilligan (Drew), and Jessica to return with the balance of the gear, I found a pretty good spot to set up. And yes, there were mosquitoes, ticks, no-see-ums, gnats, and a host of other insects, and no, we did not take any “Off”. Hey, we were trying to do as the natives do! 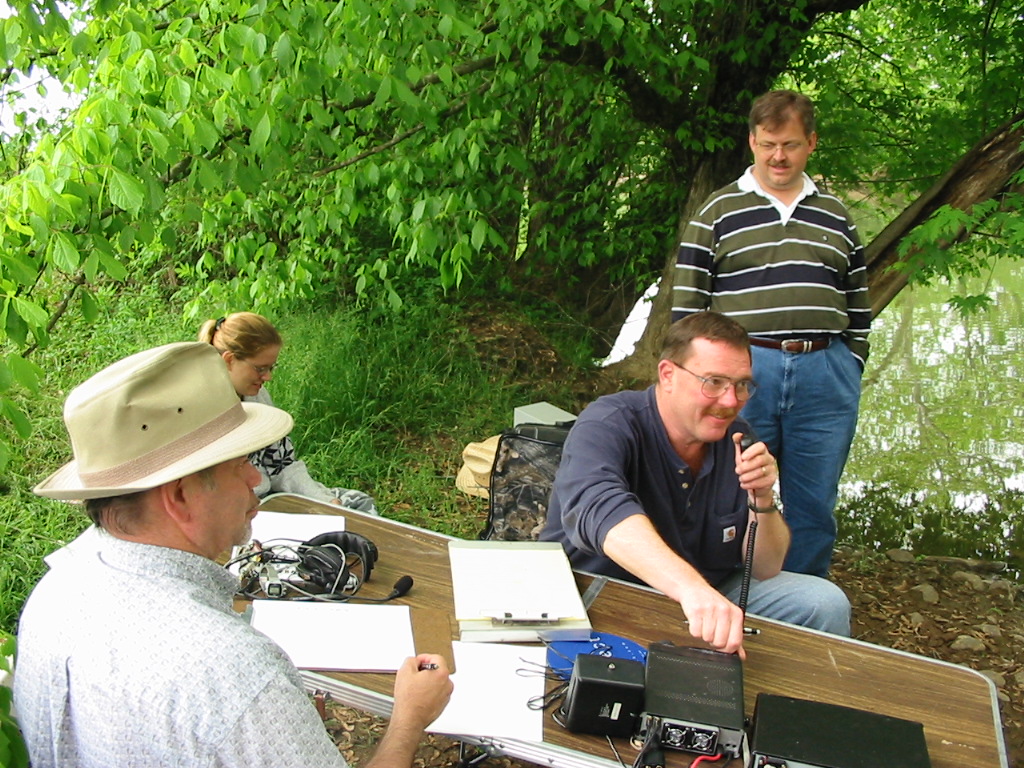 We were quickly setting up, and then we noticed John (W8DIT), on the shore, so “Little Buddy” went over to get him, as I would not think of beginning without the absolutely best paper “Logger” in the Eastern U.S.! 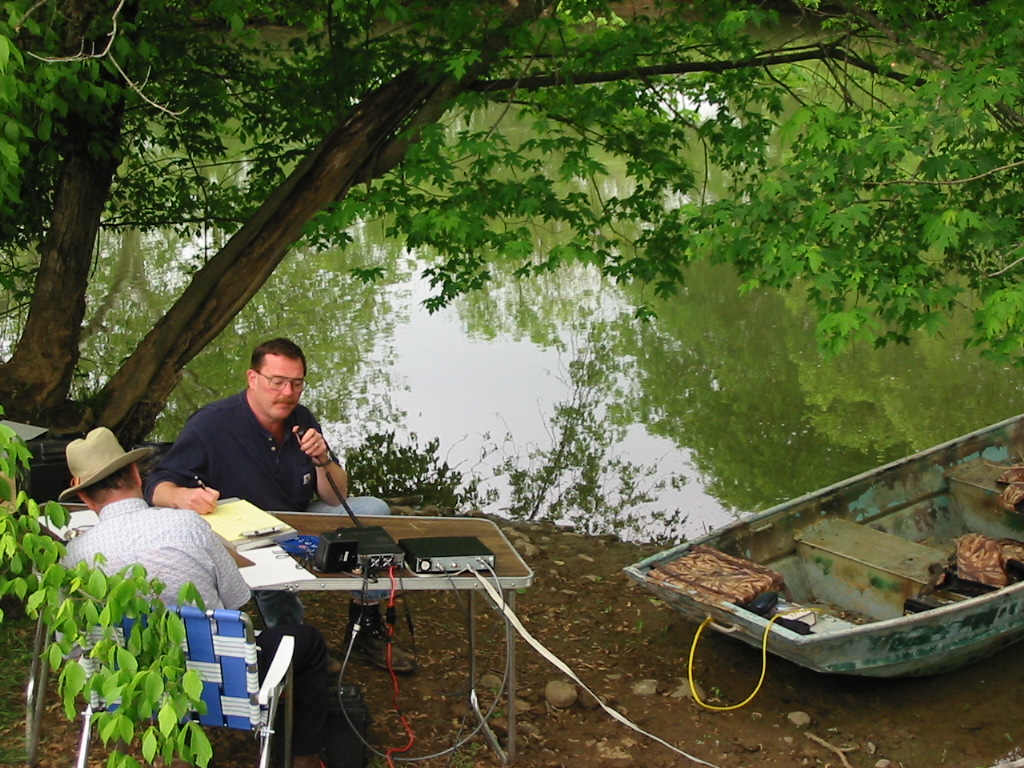 Rarely have I ever experienced 20m as crowded as it was that day, but I finally got a somewhat quiet frequency at 14.254 around 1705 z, and started calling CQ. Finally, the contacts started rolling in, and there were 5’s, & 0’s, 2’s, at first, then we heard from Rees, (VE7IU), and he promptly put me on a cluster, and I would like to thank him for that as the contacts really started pouring in!!!

Many thanks to all of you that made QSO ‘s with our little expedition, as we did end up with thirty-four contacts logged, including Canada, and Mexico prior to the wonderful thunderstorms of East Tennessee coming to visit us.

The “S.S.S. Minnowette” only took on a few gallons of water, but I am working on a new hull-patching “concoction” that will either stop the leaks, or eat through the hull. Thanks, Mr. Murphy, for not coming along on this one!

We do have many new island activations planned for the summer, and into the fall, so stay tuned to the USI web site for the listings, and while you are at it, thank the guys from the USI site for all the work they do!